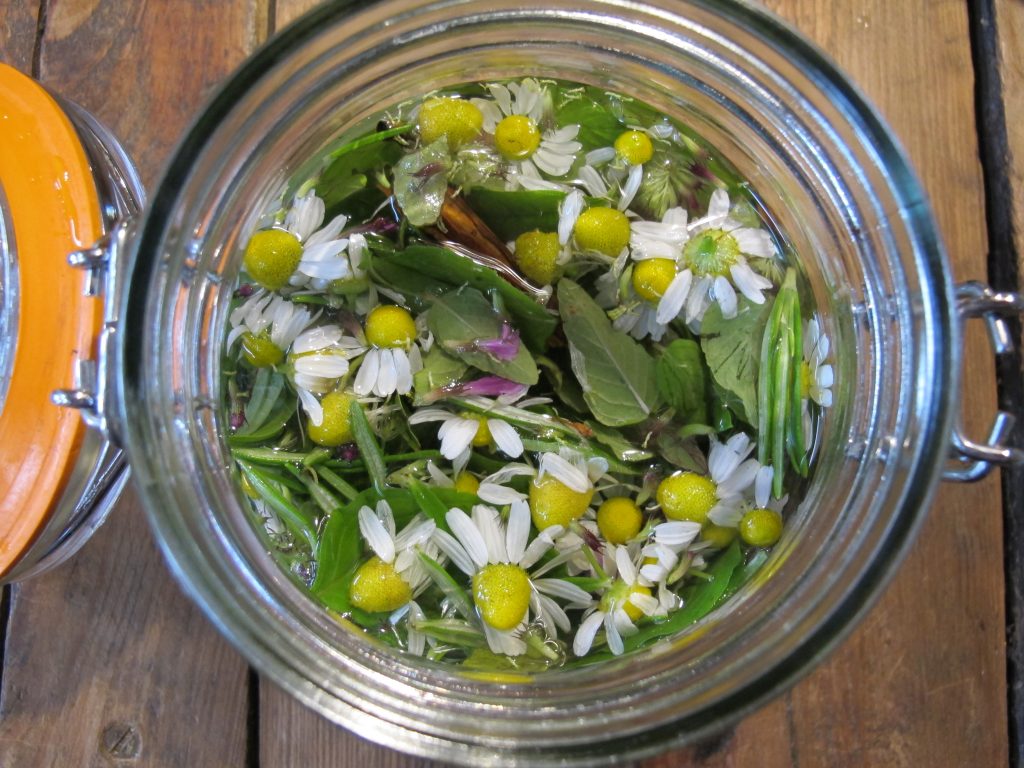 - I love it and I am making my own version with our own summer herbs. It’s tasting good already so I thought I would share the story.

Fabulous Galicia is where our son is living now and on visits over there we have discovered this wonderfully flavoured drink. It’s full of the scents of summer meadows, chamomile, mint and hay. I bought a bottle from a lady on the market, it was in a re-used local wine bottle and wrapped in newspaper! Haha, It was a bit rougher than others we had tasted but it was her own home made liqueur. Inspired by the whole idea of a drink that tastes of the meadows I have started by own version – it is pronounced “a-ru-ka di yer-bas” – the recipe is at the bottom of the page. 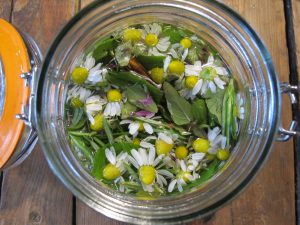 Orujo’s basic ingredient is the residue from wine production. Once the grapes are crushed, the orujos or residue of the grapes can be used to produce the liqueur of the same name. The grape skins, seeds and stalks are fermented in closed vats and then distilled. Stills, called alambiques, alquitaras or potas are traditionally large copper kettles that are heated over an open fire for six hours or more.
The orujo that is produced by the distillation is a colourless liquor, while an “aged orujo” is created by storing in oak barrels for at least two years, this is amber in colour
Orujo is made in the north of Portugal and Spain, some monasteries in Cantabria have been distilling orujo since the Middle Ages. Each November the town of Potes celebrates the ‘Fiesta del Orujo’, including tastings and a contest where participants distill orujo in public with their own stills and judges award a prize for the best-tasting batch. Since the 16th century Galicians have made orujo on their farms and take great pride in their liqueur, each family carefully guarding their own secret recipe. However, there are now over 20 commercial producers of orujo within the ‘Denomination Orujo of Galicia’ which was formed in 1989.
From orujo, Galicians traditionally make a drink called Queimada, in which bits of lemon peel, sugar and ground coffee are put into a clay pot or a hollow pumpkin, then the orujo is poured on top and the pot is set on fire until the flame turns blue.
In mountainous Cantabria and Asturias four main derived versions are known, the original orujo, orujo de hierbas (or té de los puertos, tea of the mountain passes), orujo de café (café de los puertos) and crema de orujo (orujo cream).
As for the herbal liqueur, many herbs can be used for flavouring, some of the most common ones are bay leaves, lemon leaves, sage, cloves, cinnamon and saffron. However, people also use chamomile, tea, mint, juniper berries or lemon verbena, among others.
My choice of herbs is listed below but you can choose you own favourites. 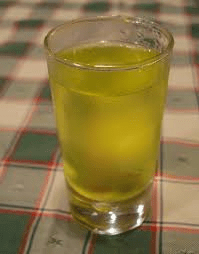 Preparation
1. pour the orujo or vodka in to a large jar with a lid
2. Add the herbs and stir well.
3. Let the mixture stand for 10 days in a cool, dark place.
4. To prepare the syrup, put the sugar and water in to a pan and bring to a boil. Cook for a couple of minutes until the sugar has completely dissolved. Then remove the syrup from heat and let it cool.
5. When it is at room temperature, add to the liqueur, mix well and let the mixture stand for 10 days more.
6. Then filter the liqueur and bottle it.
7. Keep the liqueur into the freezer, as it should be taken cold.